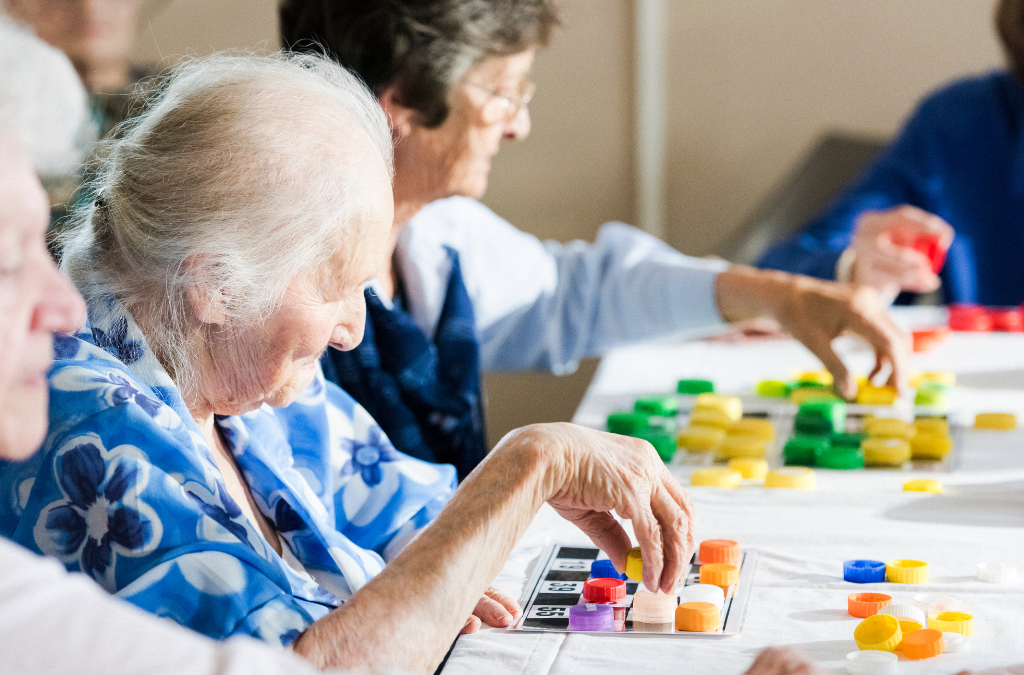 The birthday month of BINGO has been designated to be December, and we couldn’t B (47, B-47…) happier. Happy Birthday BINGO! Now, we’re not talking about the legendary farmer’s dog Bingo, we’re talking about the famously fun game that gives you a free space in the center of your playing card and the chance to yell its namesake when you win.

Among communities of Baby Boomers and older, BINGO is a routine part of their daily lives, and a game many of our residents are quite passionate about, having played it in many different places, from church, summer camp, and even BINGO parlors years ago. And why not? It has been a fun, entertaining game for all ages for many years! Centuries actually.

Here’s a little history lesson of one of America’s favorite games.

BINGO is nearly 500 years old. Its origins can be traced back to Italy in 1530, when it was known as ‘LoGiuoco del Lotto D’Italia’. Two-hundred forty years later, the French caught on in the 1770s and adopted the game, naming it ‘Le Lotto’. Fast forward to the 1870s, and the Germans turned ‘Le Lotto’ into an academic game for children, tying in lessons in various subjects. But BINGO’s appeal didn’t touch Americans until the dawn of the Great Depression.

BINGO started in the United States in 1929 (yes, less than 100 years ago), and was first played at a carnival in Atlanta, GA… where it wasn’t known initially as BINGO at all. Believe it or not, it was called BEANO. It took a New York salesman named Edwin Lowe, teaming up with mathematician Carl Leffler, to develop around 6,000 combinations of numbered game cards to get the game to where it is today, and a fluke changed its name forever. One day while Lowe was playing BEANO with friends, testing out his numerical combinations on the BEANO game boards, a guest mistakenly shouted out the word ‘BINGO’ instead of BEANO, and low and behold, the new name stuck and we have BINGO as it’s known today.

In the 1930s, a Catholic priest approached Lowe about using BINGO as a church fundraising game, and that’s why BINGO and the Catholic community in America have been so often associated together. And speaking of that clever New York salesperson Edwin Lowe, he also created another game popular with the senior community, the dice-rolling game known as Yahtzee. Note that both of these games end with the winners yelling the name of the game…nice!

In 1973, Lowe’s company was sold to Milton Bradley for the tidy sum of $26 million dollars. Today, that’s the equivalent of about $175 million bucks. Milton Bradley is most famous for the family favorite The Game of Life, although they’re also known for Don’t Break the Ice and Twister to name a few.

BINGO remains a popular daily mainstay activity among seniors, especially in retirement and assisted living facilities as it’s played for recreational therapy, socialization and let’s be honest, FUN! Residents remember the game from their younger days, it’s very simple to participate and understand for all age groups, and the game participant limit is only for how many cards you have. Younger generations have adopted the game as well, incorporating the BINGO methodology, but bringing music into it and renaming it SINGO, or in some cities, Music BINGO.

Want to pick up a game, either the original style, or a hybrid? Google ‘Bingo in my area’ and you’re likely to find someplace to get your game on. One only has to stop into a Senior Living facility to see how fierce the competition can get!

Grab a card or two and celebrate BINGO’s birthday for the WHOLE MONTH of December!